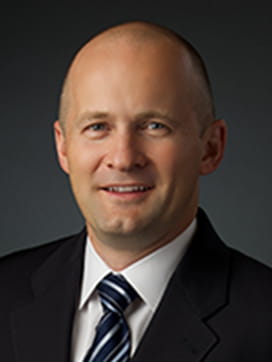 In a financial services career spanning more than two decades, Jared has taken a thoughtful approach to financial planning. He enjoys the distinct aspects of each client relationship, and investing time in getting to know each person’s needs, goals and financial mindset to create a customized plan that includes ideas for tax efficiency, risk management and retirement. He strives to live by the practice’s founding principles of integrity, insight and independence each day.

His way of doing business has earned him recognition in the industry – he was named a Forbes Best-in-State Wealth Advisor* in 2021. The path to where the practice is today began in the early 2000s, when Jared struck up a friendship with advisor Bob Jackson while they were both studying for CFP® certification. Jared officially joined Bob’s practice in 2006 and became the principal of the practice when Bob retired, carrying on the torch of client-first financial counsel. “It’s always been about understanding the moving parts of clients’ financial lives, and connecting them as part of a detailed plan,” Jared says.

His interest in financial planning began at a young age. “My father was a tax and insurance specialist who became one of the first CFP® professionals, and he began to show me the ropes in high school. I learned how complicated money can be for a family and witnessed how having a trusted professional can make an incredible difference,” he says. He went on to earn a B.S. in finance from Arizona State University – and the rest is history.

An Arizona native, Jared makes giving back to the community a priority. He volunteers with the Boy Scouts of America and was honored with admission to the Scoutmaster Hall of Fame and has earned the District Award of Merit. He served as director of programming for the Financial Planning Association of Greater Phoenix from 2006 to 2008, and has been quoted in Businessweek, Barron’s, The Wall Street Journal and Forbes.

He and his wife, Karlie, live just a few miles away from Jared’s home neighborhood. They have two children, Samuel (“Sam”) and Gabriella (“Ella”). “Needless to say, we don’t yell our kids’ names in restaurants,” Jared says. Aside from spending quality time with family, Jared enjoys outdoor pursuits including mountain biking, skiing and camping.

in the U.S., which it awards to individuals who successfully complete CFP Board's initial and ongoing certification requirements.

*The Forbes ranking of Best-In-State Wealth Advisors, developed by SHOOK Research, is based on an algorithm of qualitative criteria, mostly gained through telephone and in-person due diligence interviews, and quantitative data. Those advisors that are considered have a minimum of seven years of experience, and the algorithm weights factors like revenue trends, assets under management, compliance records, industry experience and those that encompass best practices in their practices and approach to working with clients. Portfolio performance is not a criteria due to varying client objectives and lack of audited data. Out of approximately 32,000 nominations, more than 4,000 advisors received the award. This ranking is not indicative of an advisor’s future performance, is not an endorsement, and may not be representative of an individual client’s experience. Neither Raymond James nor any of its financial advisors or RIA firms pay a fee in exchange for this award/rating. Raymond James is not affiliated with Forbes or Shook Research, LLC. Please visit forbes.com/best-in-state-wealth-advisors for more info.

Riskalyze is an independent third party service provider and is not affiliated with Raymond James.